Joy to the world!
The Lord is come!
Let earth receive her King! 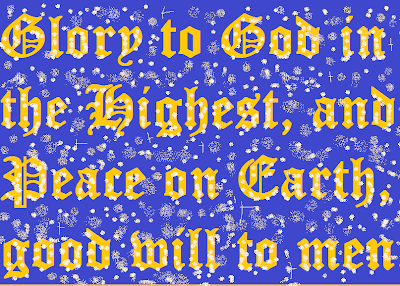 Nelson Mandela was a Communist Terrorist

I haven't been keeping up on the Nelson Mandela story but this page from the website American Vision gives plenty of information about how the adulation of the man since his recent death is based on ignorance of what he really did.

He was imprisoned for terrorist acts to which he pleaded guilty, acts that killed women and children, and terrible tortures.  Few seem to know that.  This page is mostly interviews with Peter Hammond, a South African missionary who protested Mandela's policies in office.
Posted by Faith at 10:41 PM No comments:

A weary word on Christian infighting

There seems to be an escalation of arguments between some Christian ministries these days that takes up an awful lot of time.  I've not been following most of it lately but first became aware of it because of the attacks on Jonathan Cahn over his book The Harbinger which I defended here for many months.  The last thing I posted on that subject was an interview of Cahn by Chris Rosebrough, someone I'd never heard of to that point.  I thought he did a very fair job of interviewing Cahn and bringing out the unfairness of the criticisms against him.  The ministries that attacked Cahn are very respectable ministries you don't really want to criticize in turn, but the attacks were so unfair you have to point out the unfairness.  And I personally believe you have to name the ministries or otherwise all you do is create confusion.

Then I more or less backed away from the controversies.  But it was Chris Rosebrough who hosted the debate between James White and Chris Pinto on his radio show on Wednesday, and looking up more on the debate at You Tube I found a program he did a couple months ago in which he was taking Pinto to task for slandering a friend of his, asking that Pinto apologize.

I don't want to get into all THIS either, but I listened to the first part of that radio show and felt that now Chris Rosebrough is the one being unfair.   He goes on at great length explaining how Chris Pinto had committed this sin of slander and I started getting impatient to hear the evidence.  Then when he played the audio in question it seemed to me he was completely misjudging Pinto's point.  I wish I had access to Pinto's whole show now but I don't, so this is based just on that part I heard.  Pinto described Rosebrough's friend as someone who had gone to Harvard Divinity School and then described Harvard Divinity School as where a certain professor who promoted Christian homosexuality had taught.  Rosebrough took that as insinuating that his friend was gay or supported gay Christianity but all Pinto was saying was that Harvard Divinity School is really not the kind of institution where a professing Christian should seek his education;  it's not the sort of institution where you could expect to get solid Biblical teaching.  I heard nothing more than that.  According to Rosebrough Pinto edited that part of the program afterward, but I didn't hear anything in it along the lines Rosebrough was suggesting anyway.  I couldn't listen past the first few minutes because Rosebrough was going on and on with this misjudgment and I got tired of it, so I hope I didn't miss something I needed to hear.

And now there is the debate between Pinto and White which has required me to be more aware than usual of how heated the Bible controversies can get.  And in this case Pinto is being accused quite offhandedly of being a conspiracy thinker.  As if he was jumping to conclusions from a lack of evidence, which is what that usually means, but in fact the conclusion of conspiracy is clearly based on the facts he's been researching.

I wish I could say Pinto had won the debate.  He did a very nice job of presenting his thinking and his research, but I have to conclude, as I titled my blog post on it at the Bible blog, that Truth lost the debate.  Truth just doesn't win debates these days.  That's just the way it is.  People who win debates are glib and scholarly, they demand certainty and don't have much patience with the kind of probing and inconclusiveness Pinto's research requires.   I concluded that the important issues involving the Bible versions come down to spiritual discernment and I agree with that more and more as I think about it.  That's a virtue that isn't usually evident in scholarly debate.  It isn't evident, period, in the defenders of the Westcott and Hort Greek texts or anything having to do with textual criticism or the modern Bibles.
Posted by Faith at 4:24 AM No comments:

Waking Up Among Wolves: The Antichrist Pt. 1: The Papacy

When I started this blog I had a few topics in mind I wanted to pursue, such as the woman's head covering of First Corinthians 11.  That and the Bible versions controversy quickly became big enough to get their own separate blogs.  As I was researching various subjects, such as by listening to sermons at Sermon Audio, the topic "Antichrist" kept popping out at me and eventually I decided that was going to be a topic here as well, but at first I didn't have a lot to say about it.

I mostly had the Futurist idea in mind, that the Antichrist is to be a personality who emerges at the very end before the Lord returns, and I was aware of various candidates from false religions for that title, such as the Imam Mahdi expected by the Muslims, Maitreya expected by the Buddhists and pursued in a more universal form by Benjamin Creme, and the false Messiah expected by the Jews since they rejected the true Messiah, and so on.

Unlike most Futurists, however, I did appreciate the Protestant Reformers' view of Antichrist as the papal system throughout all history and thought a particularly telling piece of evidence was the Latin title for the Pope that adds up to 666 through its Roman numerals: VICARIVS FILII DEI.  Nevertheless I had the Futurist attitude that the main thing was still the emergence of the major final Antichrist at the very end, which seems awfully close to a lot of us, and the papacy wasn't really an active agency in my mind.

Until I ran across some of Chris Pinto's films at You Tube.  Others, such as ex-priest Richard Bennett, also identify the papacy as Antichrist, but Pinto brings out the ongoing activity of the papacy as Antichrist down the centuries and into the present in a way nobody else I'd seen does.  He also made me aware of the active role of the Jesuits from their origin into the present.

This has had the effect of making the Antichrist himself come alive in a real and immediate way that I wasn't expecting at all.  It's quite startling.

It's what I mean by the title "Waking Up Among Wolves."  It's like I've been asleep to all this except in the most intellectual abstract way and suddenly it has become quite real, almost "up close and personal."  And of course this latest Pope is almost frenetically pursuing a role that easily defines him as "That man of sin."  He may or may not be the last Pope as an old Catholic prophecy predicted, and even if he is he may not be THE Antichrist, who may be a political figure like Hitler, backed by the Pope, but the development of the qualities of the Antichrist is pretty startling.

Still a "watch and see" situation, only in my mind looming large as it never did before. Kind of like waking up surrounded by wolves.

A Couple of Timely Shows from Jan Markell's Ministry

Here are a couple of recent radio shows from Jan Markell on the subjects that are her forte: current events, politics and spiritual breakdown in the Church.

On the program Entertaining Spirits Unaware Jan and guests discuss some attempts to domesticate the occult even in the Church or at least through a recent issue of Christianity Today.  Eric Barger, who writes on the occult, and Jill Martin Rische, daughter of the late Walter Martin, also a writer on the occult, are her guests.

I didn't know the occult was becoming a sort of fad in the Church. A real head-shaker. Some people really do sell their souls to Satan in exchange for worldly success. The version that is accepted in the Church, however, is more like a gullible blind acceptance of things like Harry Potter.

And Christianity Today has been off the rails on a lot of subjects for a long time. I guess it makes sense this is where a deviation in direction would end up, in an inability to see the antichristian nature of ghosts and horror stories and magic etc.

The other show is about the government's invasion of privacy of citizens, and about the current situation concerning Iran: Deliver Us From Evil
Posted by Faith at 1:14 AM No comments:

John 7:38 He that believeth on me, as the scripture hath said, out of his belly shall flow rivers of living water.

John 14:12 Verily, verily, I say unto you, He that believeth on me, the works that I do shall he do also; and greater works than these shall he do; because I go unto my Father.

I could spend a lot of time on these verses, but there's really only one simple message I want to convey: I think we ignore these promises of Jesus in a way that is depriving the Church of power these days. They have no doubt been misused, such as by the Charismatics, Pentecostals and others, but we don't have to fall into their theological systems to take them seriously. We don't need to know, for instance, whether they have anything to do with a separate "Baptism of the Holy Spirit" or not, all we really need to know is that Jesus promised this kind of power to His followers, to those who "believe on Him," and we don't have it.

One thing that is often ignored by the Charismatics and others who claim to have such power is that "The Holy Spirit is given to them who obey." Yet they expect to have the power without bothering to obey, which is no doubt a big reason why all they are getting with their zealous exertions to possess it is counterfeits.

So maybe the reason NOBODY has this power these days is about lack of obedience. Something to think about.