They've made up their minds and that is that. 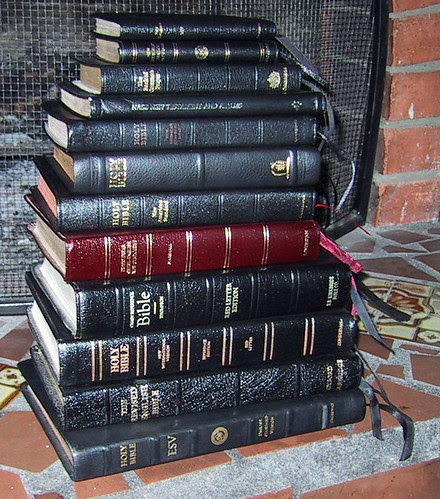 Doing some research I found this quote I think deserves notice because it makes an observation that hits home with me as only too true, about the hostile state of mind of the new versions people. It's a pastor's testimony including how he came to recognize the problem with the Bible versions.

"My knowledge on the state of the battle today is limited to my own small circle. For what it is worth, I SEE A REAL HOSTILITY THAT HAS BEEN GENERATED IN THE MINDS OF SOME OF THE YOUNGER PASTORS. There does not seem to be, on their part, a serious interest in dealing with this issue. It is better to let people make up their own minds. They, either willingly or ignorantly, see the issue as just a matter of translation. They think the newer versions read more smoothly. It doesn't seem to matter whether they are also accurate. It is the hostility, however, that is troubling. Sides are forming and deep prejudices are evident. To be 'a King James man' is now a term of opprobrium. This opposition is within 'so-called' evangelicalism, not as in the past, from the liberal-modernist camp. 'Truth is fallen in the street' "(Isa. 59:14; Jer. 5).

Yes, this topic feels like a war zone. He says his own knowledge is limited to his own circle, but you find this wherever you go on this topic. The new versions people mischaracterize KJV-onlies, misrepresent them as all irrational and lump them all in the same group with the real extremists like Peter Ruckman, without taking much care to distinguish different KJV advocates from each other. In any case they do not take their argument seriously. They impatiently toss out the party line and don't expect an answer they have to bother about and leave it at that. They don't have time to listen to the arguments. Nonexperts who are convinced will say they researched it (which amounts to having read James White's book and perhaps some other new versions advocates and maybe a bit of the KJV extremists), and that is the end of that.

And yes, it is all treated as a matter of translation and how well they think it reads. As with Daniel Wallace and James White, usually the KJV is listed along with all the new versions as just one of the many "translations" with their strengths and weaknesses, without any mention that the KJV is based on a different set of texts. Is this duplicity? Since they argue so strenuously for the Critical Text over the Received Text it's hard to believe they don't know they are misrepresenting the facts in doing this, but perhaps somehow in their own minds they really don't make the distinction most of the time.

Most of the arguments against the new versions are excellent, but few will listen.