The Symbols of the Council of Europe

Stumbled on the Council of Europe recently, because of its declaration against creationism (there's a post on it at my blog, Fantasy of Evolution), and found it to be an even more interesting sign of the last days than the European Union. Here's their official website.

The symbols associated with this organization are very interesting, starting with their Flag of Europe that has a blue ground with a circle of twelve stars on it. I immediately thought of the woman in Revelation 12:1:

And there appeared a great wonder in heaven; a woman clothed with the sun, and the moon under her feet, and upon her head a crown of twelve stars:

This passage is understood by Protestants to refer to Israel (sometimes the Church) as the mother of the Messiah, the stars representing the twelve tribes...

...but the Roman church interprets it to refer to the Virgin Mary. And I thought of Alexander Hislop's conclusion that the Image of the Beast will be this Catholic notion of "the Virgin Mary" which has been making demonic appearances here and there over the last century. 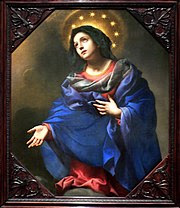 The symbol makers for the Council of Europe have other ideas about its meaning, but the flag's designer admits that the image in Revelation -- as understood by the Roman church -- was part of his conception:

Of course anything that reflects the uniting of European states suggests the common Protestant interpretation of the ten toes of the great image in Nebuchadnezzar's dream interpreted by the prophet Daniel, along with the ten horns of the fourth beast of Belshazzar's dream in Daniel 7 (The Council began with ten members).

The first dream describes the rise of four empires starting with Babylonia under the figure of the great statue made of different metals, the second dream symbolizes them as different beasts. The fourth beast is the Roman Empire, and Europe is regarded as the ten toes or ten kings to arise from that empire.

Another symbol I find interesting is this coin which was issued in Armenia to commemorate that nation's joining the Council in 2001. I couldn't find a discussion of its imagery but I have to suppose that the ten curved strokes that fan off the logo of the twelve stars with the e for Europe represent the first ten states of the Council at its formation.

Then there is the Council's Anthem, Beethoven's Ode to Joy, based on the poem by Friedrich Schiller.

It's kind of the Romantic Classical period's version of Michael Jackson's We Are the World, We Are the Children, which could be the anthem of the reign of the Antichrist with its world worship, self-salvation and brotherhood of fallen humanity. I'll leave your taste in the music itself up to you but I have to say that once I grasped the meaning of the words the music might as well have had all the beauty of the Corpse Flower. (Well, that's a bit harsh, isn't it? The music remains beautiful, but the words do spoil it for me, celebrating the antichrist view of happiness as they do. Kind of like that proverb about the pig with the golden ring in its snout).

The Corpse Flower ought to be the CoE's National Flower.

Here's Part Two, the ending of that performance, in which we are exhorted to "seek the Creator, far above the starry vault." Jesus Christ does not figure in the account, it is truly an ode to "joy," not to God, and the "divinity" mentioned is not the true God. This is a deistic and universalistic message that blasphemes God by denying the Son. (1 John 2:23 Whosoever denieth the Son, the same hath not the Father: (but) he that acknowledgeth the Son hath the Father also.)

And here is Michael Jackson's "We are the World, We are the Children" with a huge cast of pop luminaries:

(Hm, listening to this again a while later I noticed the line that says God turned stones into bread. But God didn't do that. Not that He couldn't have, but in the Biblical context it would have been a cheap self-serving trick. The devil tempted Jesus after His forty-day fast in the wilderness, to turn the stones to bread to satisfy his hunger, and He refused. Just kind of interesting that that sort of mistake would be in this sentimental man-exalting song).
Posted by Faith at 9:41 AM No comments:

Exhortations to watchfulness in the very last days

Isaiah 55:6-7 Seek ye the LORD while he may be found, call ye upon him while he is near: Let the wicked forsake his way, and the unrighteous man his thoughts: and let him return unto the LORD, and he will have mercy upon him; and to our God, for he will abundantly pardon.

Luke 21:34-36 And take heed to yourselves, lest at any time your hearts be overcharged with surfeiting, and drunkenness, and cares of this life, and so that day come upon you unawares. For as a snare shall it come on all them that dwell on the face of the whole earth. Watch ye therefore, and pray always, that ye may be accounted worthy to escape all these things that shall come to pass, and to stand before the Son of man.

Acts 20:28-32 Take heed therefore unto yourselves, and to all the flock, over the which the Holy Ghost hath made you overseers, to feed the church of God, which he hath purchased with his own blood. For I know this, that after my departing shall grievous wolves enter in among you, not sparing the flock. Also of your own selves shall men arise, speaking perverse things, to draw away disciples after them. Therefore watch, and remember, that by the space of three years I ceased not to warn every one night and day with tears. And now, brethren, I commend you to God, and to the word of his grace, which is able to build you up, and to give you an inheritance among all them which are sanctified.

2 Thessalonians 2:3-16 Let no man deceive you by any means: for that day shall not come, except there come a falling away first, and that man of sin be revealed, the son of perdition; Who opposeth and exalteth himself above all that is called God, or that is worshipped; so that he as God sitteth in the temple of God, shewing himself that he is God. Remember ye not, that, when I was yet with you, I told you these things? And now ye know what withholdeth that he might be revealed in his time. For the mystery of iniquity doth already work: only he who now letteth will let, until he be taken out of the way. And then shall that Wicked be revealed, whom the Lord shall consume with the spirit of his mouth, and shall destroy with the brightness of his coming: Even him, whose coming is after the working of Satan with all power and signs and lying wonders, And with all deceivableness of unrighteousness in them that perish; because they received not the love of the truth, that they might be saved. And for this cause God shall send them strong delusion, that they should believe a lie: That they all might be damned who believed not the truth, but had pleasure in unrighteousness. But we are bound to give thanks alway to God for you, brethren beloved of the Lord, because God hath from the beginning chosen you to salvation through sanctification of the Spirit and belief of the truth: Whereunto he called you by our gospel, to the obtaining of the glory of our Lord Jesus Christ. Therefore, brethren, stand fast, and hold the traditions which ye have been taught, whether by word, or our epistle.

Revelation 3:1-5 And unto the angel of the church in Sardis write; These things saith he that hath the seven Spirits of God, and the seven stars; I know thy works, that thou hast a name that thou livest, and art dead. Be watchful, and strengthen the things which remain, that are ready to die: for I have not found thy works perfect before God. Remember therefore how thou hast received and heard, and hold fast, and repent. If therefore thou shalt not watch, I will come on thee as a thief, and thou shalt not know what hour I will come upon thee. Thou hast a few names even in Sardis which have not defiled their garments; and they shall walk with me in white: for they are worthy. He that overcometh, the same shall be clothed in white raiment; and I will not blot out his name out of the book of life, but I will confess his name before my Father, and before his angels.
Posted by Faith at 9:23 AM 2 comments:

Corpse Flower blooms in America on the 4th of July, Symbol of death and rot and the end of all things 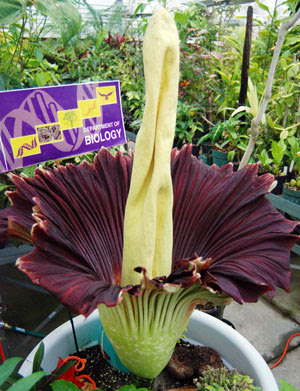 Slow on the uptake here but perhaps the point remains apt. I found myself using the phrase "The Great Apostasy is in full flower" and what popped into my mind was the recent blooming of the "corpse flower" at San Francisco State University in California, on July 4th as a matter of fact.

The corpse flower, or Titan Arum, is famous for its death-like stench and its huge central flower structure.

A huge unbeautiful flower that blooms seldom and for only a brief period, that smells like a rotting corpse as it opens and thrusts up its commanding central spike, a flower that is pollinated by . . . FLIES, the emblem of Beelzebub!

It seems the perfect emblem of the great falling-away, which is to come to full bloom just before the final Antichrist rears his ugly head for his cruel and bloody reign over the entire world, which will last only three and a half years just before our Lord returns. It's coming very soon. We need to be prepared.

Isaiah 55:6 ¶ Seek ye the LORD while he may be found, call ye upon him while he is near: 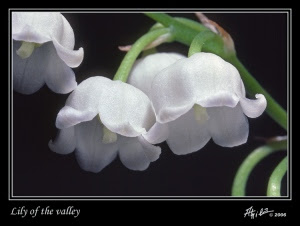 Lily of the Valley.

But alas, it is probably also the perfect emblem of the current state of our nation in the midst of the great falling-away. I can't take its flowering on July 4th as mere coincidence myself. Nothing happens without some significance whether we are in a position to appreciate it or not, and July 4th is just too big a significance to be missed.

Well, the phenomenon is of interest in itself I suppose if you don't like my take on its symbolism. 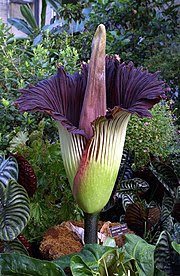 However, there's more symbolism that could be wrung from this event if you'd like to ponder it on your own. Take the flower's nickname "Titan Arum" for starters and think about who the Titans were and whether they might hold some relevance to the last days before the Lord's return.

The titan arum grows in the wild only in the equatorial rainforests of Sumatra, Indonesia. It was first scientifically described in 1878 by Italian botanist Odoardo Beccari.

Right about when the Great Apostasy was getting going in Europe. 1881 was the date of the Westcott and Hort Bible Revision in England which was certainly a major launching or spewing forth of the apostasy.

The plant flowers only infrequently in the wild and even more rarely when cultivated. It first flowered in cultivation at the Royal Botanic Gardens at Kew in London, in 1889, with over 100 cultivated blossoms since then. The first documented flowerings in the United States were at New York Botanical Garden in 1937 and 1939.

You can find a You Tube discussion of this plant by David Attenborough in which he says it flowers in the wild about once in three years. The flower lasts about three days. I could eke out some symbolism here too I suppose, but it would be a little forced.
Posted by Faith at 5:51 AM No comments: