Mourning and Hoping and Mourning for America 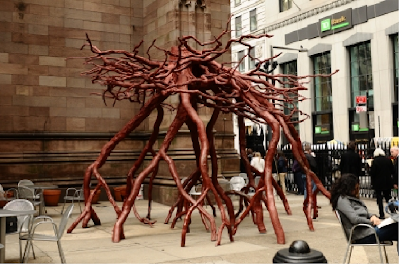 HARBINGER (OMEN, SIGN) OF GOD'S JUDGMENT AGAINST AMERICA: The Trinity Tree Root, from the Trinity Wall Street Church website. The picture below of the sculpture as seen from above is from the same site. Click to enlarge.

These symbols left in the wake of the 9/11 attacks that so uncannily reflect Isaiah 9:10 are like God speaking directly to us, directly pronouncing judgment yet to come, but who is paying attention? A hunk of hewn stone at Ground Zero,* a bronze tribute to a dead uprooted tree (and bronze in the Bible is symbolic of judgment, said Cahn), on the property of the church where George Washington prayed at his inauguration to the Presidency -- these are God's calling cards. That church is now thoroughly anti-christ, and it has a Wall Street address. The whole shebang points to judgment against America as a nation, specifically against the American economy, and seems to explain it all as it were by fingering THE CHURCH, the apostate churches for sure but the church at large which has let the nation down by failing to be the spiritual protection we're supposed to be.

The harbingers, the omens, are symbols of human arrogance and defiance of God blithely unrecognized even by most supposed Bible believers. It's all been signed and sealed as it were by three of our political leaders pronouncing the vow of defiance against God in the very words of Isaiah 9:10 -- "we will rebuild" -- rather than humbling ourselves in the face of God's judgments against us.

Where do I get any hope out of this at all? I get it out of the fact that the symbolism IS so uncanny it seems that even the most obtuse unbeliever has to recognize it and if they recognize it then there is a chance for the repentance that is the only way the nation could possibly avoid what the omens portend.

But as I said, it's a rollercoaster and I soon fall into doubt. Even after it's pointed out and explained I know only too well that a determined resister of God can still deny it.

Of course the true churches could fast and pray in sackcloth and ashes, and confess the sins of the nation as Daniel did, but is that going to happen? Well, if something like that doesn't happen, then the judgment is inevitable.

I've puzzled and lamented for a long time about why God isn't sending us revival. Now I know for sure why we haven't had revival. Our doom is signed and sealed by our leaders, and by that hewn cornerstone* and that bronze tree root that God made sure got placed where they can't be ignored. Oh sure, they can and will be aggressively misinterpreted just as the scripture that describes them was unless Cahn's message gets out. 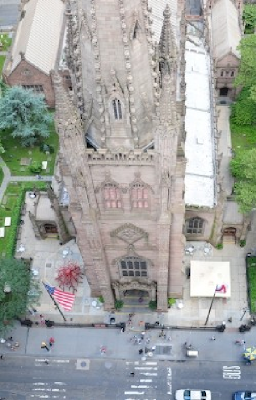 They strike me as something like the seal of a notary, on the Ground Zero site, at the site of the apostate church. Or like the handwriting on the wall against the Babylonian king Belshazzar, only set in bronze and stone so it can't just disappear but will remain as a testimony against us. Even if the entire country were razed to the ground those symbols would most likely remain untouched,* because they are God's witnesses against us. Oh, and the "Tree of Hope" too, the Norway spruce which replaced the felled sycamore, which should really be called the "Tree of Judgment" or the "Tree of Doom."

Three witnesses against us in those icons, all reflecting the words of Isaiah 9:10, plus three of our leaders declaring our doom, also in the words of Isaiah 9:10. Isaiah 9:10 gave the reason God brought judgment against Israel and now He's allowed that very verse of the Bible to stand for His intention to bring judgment against America as well. It seems impossible that anyone could explain away the uncanny equivalence of terms and imagery but I have to remember that today's atheists don't have any problem denying the obvious.

Cahn even mentioned in the interview by Jonathan Bernis (link below) how we missed revival at the time of 9/11: After 9/11 the churches filled up, people were hurting and seeking an explanation. Instead of hearing the truth from the preachers, that this is God's judgment and the nation needs to repent and turn to Him, what they heard was all that mealymouthed denial that it was God's doing. As Cahn said, there was an opportunity for the revival we've been yearning for, right there as people flocked to the churches, and the CHURCHES BLEW IT.

* * * * * * * * * * * * * * * * * * * * * * * * * * * *
*I have asterisked mentions of the cut stone that was placed at Ground Zero, that was intended to be the cornerstone of a new building called the "Freedom Tower," because I ran across the information that two years after it was placed there it was removed. This was because of a change in plans for the rebuilding of the area. Of course its placement in the first place and the speeches over it that maintained the theme of Isaiah 9:10 in America's defiance of God still stand against us, but I was wrong when I said that all these physical harbingers based on that scripture would no doubt outlive the nation itself.
Posted by Faith at 1:44 AM No comments: