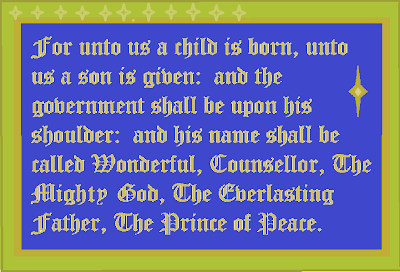 It seems like only a few short years since the Biblical story of the birth of Jesus was treated respectfully by the general population, if not quite as true at least without challenging it. Now you find on many websites, except of course the Christian sites, it's treated as "The Christmas myth."

In those "olden times" you could ignore the Christian message if you wanted to, and emphasize the pagan aspects of the holiday, the Santa Claus myth, the Christmas tree, mistletoe and all that, but there was enough of a blending that if you believed the Biblical story you could also include the pagan elements as holiday color without taking them too seriously. The Christmas tree was included by Martin Luther in the celebration after all, and some Christian churches made a Christian symbol out of it too. Nativity scenes and Christmas cookies shaped like trees and Santas all came together in one merry mélange.

Or if the pagan aspects were objectionable to them, some Christians would stick entirely to the Christian meaning of the holiday. It couldn't have been the actual birth of Jesus but it's as good a time as any to celebrate it since the actual date isn't given in scripture anyway.

The last few years I've written posts critical of being too strict about the pagan aspects since nobody today celebrates them as such, they are just part of the festive atmosphere of the season. Nobody's heard of Saturnalia except a few owlish types, for instance, so there really isn't any danger of many if any actually celebrating it.

But this year I find my emphasis changing. Now the Christian meaning of Christmas is being more aggressively treated as a myth than I recall being the case before. There's also quite a bit of mockery out there. I was looking for nativity scenes at Google image and found I had to look very closely to be sure I wasn't getting something even possibly obscene. There have always been unbelievers of course but for the most part they've entered into the festivities with Christian family and friends without feeling the need to Grinch it up. I loved Christmas long before I was a Christian, and don't recall ever feeling "offended" by nativity scenes or any of the rest of it that now "offends" some people. But even this growing grinchiness about offense didn't become a generalized mythification of Christianity. And I don't know if I'm being hypersensitive this year or if I've really tuned into a point where the whole culture has stepped over a line, now treating the central holiday that celebrates the birth of the Savior of Mankind, the defining holiday of Christendom, as a myth, in a way that severs the church from the culture more definitively than ever before.

I doubt it's going to show up among the holiday crowds out shopping, it's just something I've encountered online so far. It just seems like there's a lot of it. Sites that display iconic Christmas decorations and images call it all a "myth." I found it jarring to be looking for such images and encountering that term. These are people who are celebrating this myth too. At least there's that, I suppose, they don't want to do away with it.

And think how foolish we all are who believe all this.

I remember when I first believed in it how astonishing it was. It really IS astonishing, you know. It's easy enough to see why modern man has such trouble with it. But when I believed I simply believed. I suddenly knew God was real and if God is real then all these things are also real. That's what we're supposed to do, you know, simply believe. Getting hung up on astonishing supernatural things is just a sign we're not believers, we're still worldly. If God be God what problem can there be with all these things?

Oh astonishing yes, especially for those of us who grew up in today's scientifically biased secular rationalist environment. The earth only 6000 years old? It made me laugh. I didn't doubt it, God is God, the Bible is His word, but it made me laugh out loud. Angels, oh lovely, I'm so glad there are really angels. That makes me very happy. And God Himself become a Man, what a wonderful thing to try to understand. It takes a while to understand it, you have to grow into it, hear a lot of sermons, do a lot of reading, but from the very beginning a believer is a believer, it's just that the new understanding you now inhabit is much too large for you at first.

When I first heard all the old familiar carols sung at my first Christmas in church I couldn't stop crying for recognition and joy. All those words I'd sung all those years by rote had become real. It reminds me now of mystery writer Dorothy Sayers writing about her discovering as a new believer herself that King Ahasuerus was real and all the Biblical events surrounding him were real. She knew her history but somehow had never put the Biblical figure together with the historical figure Xerxes. And C.S. Lewis too, a scholar of the literature of myths and legends himself, comes to realize that the God who died and rose again that is a theme in many of the mystery religions, actually happened in reality. It's hard to forget his phrase: "Rum thing." A friend remarks to him that "it seems it really might have happened once." Such recognitions are powerful.

The Christmas carols still make me cry sometimes, because they tell of an unbelievable mythical story that has become believable reality for me.


Angels we have heard on high... It came upon a midnight clear... O Little Town of Bethlehem... Joy to the World the Lord is Come... God rest ye merry gentlemen let nothing you dismay, remember Christ our Savior was born on Christmas Day, to save us all from Satan's power when we were gone astray...

I'd never actually thought about those words before. Now they shook me to the core. They still do.

It's real, but it's like a Fairy Tale that has turned out to be real, the most amazing thing. Or "Rum thing." It all occurred in historical time. The account of the birth of Jesus in Luke is full of historical markers, there is no doubting it all happened on this real Planet in real time. In fact a lot of the fairy tales echo elements of this True Story.

Because there is a way it is very much like a Fairy Tale. The true Prince whose rightful position has been usurped by the prince of the wicked spirits, has been tasked with saving the people of His Kingdom who were put under a spell by this wicked prince and are now held captive by him. The true Prince, the Son of the Great King, had to become a human being Himself in order to be our Savior and Mediator, then performed the self-sacrificing deed that was the only thing that could defeat the wicked prince and set us all free from captivity. He won Himself a Bride by doing this, His Church. The story is still in progress. Great things are prophesied to come before Satan, the wicked prince, is completely vanquished, and the true Prince, now both perfect God and perfect Man, can be united with His Bride and All Live Happily Ever After.

O join the happy throngs you silly people who refuse to believe this Fairy Tale that is realer than real.

I don't have anything to post right now so here's a link to this most recent post on my other blog, A Trio of Feathered Characters
Posted by Faith at 2:32 PM No comments: